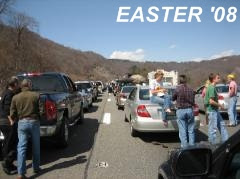 I added some photos from my recent trip home for the Easter holiday to the Photos page.

A really good friend told me I should check out Hulu. Like me, he gave up cable television and was looking for alternatives. I gave up cable television a couple years ago because I was tired of the expense compared with the lack of options. Really, there were only a few stations I would miss having, Comedy Central and SciFi for instance; and there were several channels that weren't included that I would have loved, such as Sundance and the IFC channel. At that time some subscription-based channels, such as HBO, were already offering On-Demand content, so I suspected that television content would eventually migrate to the internet, it was only a matter of time. It seems that process has begun...finally.

But its been slow: The Internet appeared to be more suited for user-created content, the likes of YouTube and such, and Studio/big-media driven content has remained mostly only available trough the traditional mediums of cable and satellite. And as great as user generated content can be, its mainly suited for a niche audience (although a growing one), and lacks the capabilities a studio with a lot of money behind it can provide. They compliment each other in the sense that they each offer something unique. Note: An interesting splice of a big-media concept with user-generated content is the web-based game show PlayCafe, which combines a host narrating players on the Internet playing live. Its more of a community than a game show.

But it seems that corporate media has seen the potential to profit by putting their content on the web, with the success of Internet video companies like YouTube. (This was one of the most important factors in the television writer's strike that ended only recently -- the money earned through online ads wasn't adequately reflected in the their contracts.) From what I've seen, the best stride to bring traditional big media programs to the Internet is what my friend showed me, the result of a partnership between NBC and Fox called Hulu. But there have been quite a few other endeavors to push television content onto the web along the way. Most of these video services require a fairly high bandwidth Internet connection.

I had been looking for a good alternative for awhile. About a year ago I signed up to beta-test Joost (pronounced “Juiced”) - startup company from the guys who created Skype (the VOIP telephone service) and Kazaa (the peer2peer file transfer program). They sold Skype to Ebay and began to develop a high-quality video service under the code-name The Venice Project. Since they were not affiliated with any major media companies who could foot the bill for the huge bandwidth requirements; their solution was to utilize peer-to-peer technology (similar to the way file-sharing applications like Kazza and BitTorrent work) that allows high-quality content to trickle across a network of users rather than from one constant source. It functioned like an on-demand service with short ads to bring in enough revenue to cover the expense of the content provided. Its a cool idea, and has nice user interface, but the content they've arranged has never lived up to the technology's potential. They did strike a deal with the major media company Viacom (parent company of CBS, MTV, Comedy Central and others, and who has been vehement in having its content pulled from unlicensed sources such as YouTube) and other some other corporate media sources, so some interesting content is available but dated. And most of Viacoms content is available on the net for free through its network websites (I wish this was the case for Comedy Central -- the Colbert Report had only just started airing when I terminated my cable service).

Having recently gotten addicted to the show LOST, which only happened as a curiosity after getting caught up in the hyper-viral campaign for JJ. Abrams' movie Cloverfield. I had to find a way to catch up on the episodes I'd missed to understand the story. ABC has many of its shows online, some in HD quality. You can watch all four seasons of LOST. You just have to install a simple plug-in to your web-browser for their video service to work.

The best I've seen so far is Hulu. Many shows are available in their entirety on Hulu from NBC, Fox, and many of their affiliated networks like Bravo, SciFi, FX, and quite a few others. You can watch all three seasons of Arrested Development, the most recent seasons of The Office, 30 Rock, and Heros, to name a few. There is a lot of great Science Fiction available such as Firefly, episodes from the new BattleStar Galactica as well as the original Battle Star Galactica, and a spin-off of the original called Galactica 1980. Hulu has shows I'd almost forgotten about like Sliders, and ExoSquad – a show I enjoyed when I was a kid. (ExoSquad had a plot similar to BattleStar Galactica--Humankind fighting for survival against a race it created, which is also like The Matrix, which has a character called Neo who “jacks in” to the virtual world, which I remembered, is so similar to the way the humans jack-in to their exo-suites in ExoSquad.)

Hulu is by far the sleekest, best organized version of big-media content on the Internet. For a complete list of television shows available by network click here.

Out of curiosity I thought: what would happen if I googled “Google”? Would it be like in that scene where actor John Malkovich goes through the special door in the movie Being John Malkovich (IMDb) into a world where everything is John Malkovich? Would I go to a place where all things equal Google, the final ultimate perfect algorithm.

Instead I stumbled upon another google with a .org instead of a .com. (.net just takes you to google.com). Google.org is the philanthropic arm of the company, and its designed to be focused on global issues such as confronting climate change by supporting alternative energy and rechargeable hybrid vehicles, and other issues such as access to public services, support of small business, and so on. It seems when people or companies make so much money they aren't quite sure what to do with it, they tend to seek out altruistic ways to use their massive financial wherewithal. Such as is the case with The Bill and Melinda Gates Foundation. The almighty search engine intends to utilize solar energy to power its Googleplex and as a company intends to be carbon neutral in 2008.

I think this fairly well crafted video does a good job to parody the growing omnipotence of Google. Thanks to my friend Joy who shared this with me. She found it by subscribing to the free podcast “Best Of Youtube.”


Note: at the time of this blog post there were 1,218,964 views for this YouTube video (which is a company acquired by Google). According to wikipedia there are 16,805 full time employees at Google. Thats, an average of 72.53 views per employee – and thats just one video on YouTube. Considering all the ad revenue, its no wonder that Google is dominating the tech industry.

Recently while I was at the movies there was a trailer for a film called The Signal (2007) (IMDb), which appears to be about a pandemic of violence triggered by some sort of transmission over air waves -- another of many large-scale survival-horror films about an outbreak of either zombies, vampires, or a disease related cause -- following in the footsteps of films like 28 Days Later, the 'of the Dead series, 28 Weeks Later, and so on. But what probably sets The Signal apart from those films is that: A) its on an indie budget, and B) from what I've read, it tells the story in three separate parts, which might mean the story is told with a non-linear style similar to how the story in Pulp Fiction was told. Or it could just be about three different perspectives in a disaster scenario. (I usually prefer films like this of a smaller-scale where the frame of reference is from the perspective of an individual or a small group, such as: The Thing, the remake of 28 Days Later, I Am Legend, and The Mist.)

But as I was searching for information about this movie, there were two other films in production that caught my attention because they seemed very similar in concept -- being about pandemics of violence. The first of which is from M. Night Shyamalan (who directed The Sixth Sense, Signs, Unbreakable, etc.) who has a film coming out this June, called The Happening (IMDb). There has been some speculation on forums and message boards that the violent pandemic in this film is a result of a toxin released by plants; so there might be some sort of environmental twist.

The second film I looked over that resembles The Signal is based on Stephen King's Cell (IMDb), due out sometime in 2009, directed by the guy behind the Hostel films. Based on King's novel (that predates The Signal) and seems to have a plot that thats nearly identical.

A couple days ago I saw Be Kind Rewind (IMDb), the latest film by director Michel Gondry who's previous films include Eternal Sunshine of the Spotless Mind (2004) (IMDb), and The Science of Sleep (2006) (IMDb). I didn't expect this film to be like those two (and it wasn't), but I was hoping for Gondry's impressive camera tricks to play a crucial role (which it did).

Eternal Sunshine, and The Science of Sleep are both intense love stories that use some very original camera wizardry to show or deal with the uncomfortable reality of tragic and/or unrequited love. Gondry uses old-school camera tricks instead of expensive computer generated effects. It really helps to blur the scenes together in Eternal Sunshine and in Sleep it gives a cartoon like look to childish/innocent notions of love.

Unlike Eternal Sunshine and The Science of Sleep, Be Kind Rewind is not a love story. Its a story of two friends, played by Jack Black and Mos Def, who are trying to save a local video store from going out of business. Because of unusual circumstances the video store that only rents VHS tapes has had all its films erased. This happens while the owner, played by Danny Glover, is out of town and has put Mos Def's character in charge of the store. The solution that occurs to Jack Black's character is to recreate the films by filming over the erased copies with themselves (and various assorted friends and loyal customers) playing all the parts which they call “Sweeded” versions of the originals.

If you really enjoy movies, the premise for this film probably sounds intriguing, as it did for me. My biggest disappointment is that too little of this film was dedicated to the “Sweeded” films. But the “sweeded” segments they do show have some sequences that are hilarious; unfortunately a lot of the best moments are included in the trailer.

Storywise Be Kind Rewind is more subtle than earlier Gondry films. There is no real love interest, other than a dysfunctional love of movies and passion for fighting the corporate nature of the movie business. This film is possibly a metaphor for holding onto your dreams but ultimately letting go -- and its also a parody of the corporate nature of the film industry the role of rental corporations, the lowest rung of the film industry (specifically how films are chosen to be made based on their marketability not necessarily their quality) and so it shows how that mechanism is sucking dry creativity and independent thinking in movies.

Labels: Be Kind Rewind, Eternal Sunshine of the Spotless Mind, The Science of Sleep