In our most recent dinner together I was only involved in eating and washing dishes. Since it takes three hours to cook, Allison went ahead and did all the work beforehand. I arrived just in time to enjoy her delicious handywook, which was some fantastic Split Pea Soup.

There were no pictures of the “making of” of the split pea soup, so took this as an opportunity to practice creating an illustration of our dinner with vector graphics. I've updated my “art” page with several newly created vector graphic images. They were made using an open-source program called Inkscape; which, although somewhat limited, is basically a very useful and free alternative to Adobe Illustrator. Currently I'm in a class were we are studying Illustrator, but I do not plan on including any of that work on this website because part of the purpose of this site is be wholly created with open-source or free software or services. I have a list of free graphic design software recommendations in my links page here.

Since Allison did all the work, I don't have a recipe this time, but to read all about all our dinners so far, including our recipes, click here.

Allison put me in charge of slicking up the potatoes, celery, carrots, and onions.

I'm really starting to lean a thing or two in the kitchen, and my culinary confidence has increased. But cooking for one is just not nearly as fun, so I'm glad we've made our weekly dinners a tradition :-)

Our next dinner plan is another variety of soup – split pea.

below is an experiment I created, I call it "Voicemail Picture Book"

Allison and I Make Breakfast For Dinner 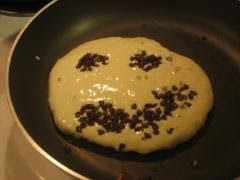 This was our ninth dinner lesson. The week before I had brought potatoes and we decided that they would be better saved for something other than Stir-fry. So I thought what about “breakfast for dinner”? Click here for pictures, and here to see of our dinner lessons.

We decided to make fried potatoes out of my potatoes as a side dish and chocolate chip pancakes as the main dish. Allison supplied the pancake mix and the chocolate chips. She also sort of took over the potatoes while I made our pancakes.

The process is this: heat a pan to medium heat on the stove. Mix up the pancake mix throughly to get out all of the lumps. Then quickly poor out how ever much you want to make the cake. 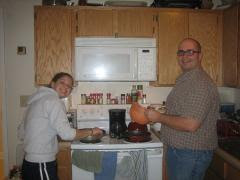 While its cooking thats when you add the chocolate chips. Allison explained its better to add them while they are cooking because if you add them to the batter then they sink to the bottom.

I had fun making different shapes and attempting to make designs with the chocolate chips.

Taken (IMDb) is very good strictly action movie. It reminds me of the action movies from the 80s and 90s where you have obvious right and wrong. But I prefer movies where the protagonist is more conflicted such as the Bourne series. The movie follows the perspective of an ex-spy played by Liam Neeson who has retired to spend time with his estranged teenage daughter. He begrudgingly allows her to go on a trip to France with her friend. Soon after she arrives she calls her dad to check in with him and as she does she realizes that some men have come to kidnap her and her friend. The father gives her some quick instructions and ultimately is on the phone with the kidnappers. He offers them the chance to be left alone if they release her, but if they don't, that he will use his skills to find and kill them. The only response he gets is “good luck.” Liam's character hold's true to his promise, and the rest of the movie is scene after scene of him tracking down and taking out everyone connected with the kidnappers.

Paprika (IMDb) is one of the most visually amazing animated films I've seen from Japan. Anime (animated films) is a large industry from Japan, and its quality is unrivaled. Anime, as a form of entertainment, reaches into much more diverse realms of Japanese culture where animation in western cultures is often intended primarily for children. Maybe this is why anime is largely under-appreciated in western society; and that might also explain the phenomenon of the niche group of western ultra-obsessive fans of the genre. The Japanese have a term for such individuals, Otaku, and its meant to be derogatory, although some obsessed fans take it as a compliment. I've seen a few anime films, and have amazed at its beauty and story-telling quality. Especially directors like Hayeo Mayazaki, who can weave such interesting and fantastic stories together with gorgeous animation. Paprika rovolves several people who are inolved with a company who has created a devise that lets its users enter and control their own and other's dreams. And unanticipated side affect is that their dreams can merge. Someone has stolen the device and is taking over the dreams of the characters involved. The heroin of the story is a girl named Paprika, who but the figment of one character's dreams. It is quite an interesting story.

Cashback (IMDb) is a British drama/comedy around a young art student who after a breakup with his girlfriend finds that he cannot sleep and so decides to trade the extra hours he's gained from his insomnia for cash by working at a local grocery store. He calls this process Cashback. Having worked in grocery stores I completely can identity with his perfect description of the techniques employees use to distract themselves from the agony of waiting for their shift to end, of accidentally viewing a clock and seeing how little time has really passed. Ultimatly he gets over his problems with insomnia by falling for a beautiful coworker who also inspires him artistically.

Ouid Pro Quo (IMDb) stars Nick Stahl (In the Bedroom, Terminator 3, HBO's Carnival) playing a paraplegic public radio reporter who gets a tip about a secret society of people who have no disability but wish they were paraplegic. As he tried to infiltrate this secretive community the only person who trusts him enough to open up to him is a woman played by Vera Farmiga (the female lead from The Departed) who he gradually begins a romantic relationship with. But as things progress more unusual truths are reveled until he discovers they share more in common than he would ever have imagined. Although a very interesting story with great acting, the filming has some serious sound problems. In crowded areas the conversations are almost inaudible. Perhaps this is something that can be fixed with remastering.

Allison and I Make Sizzling Stir-fry

This was our eighth dinner lesson -- we made stir-fry, and it was so delicious I had seconds and thirds! Click here for pictures. 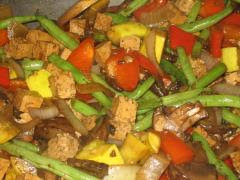 Ingredients (I purchased some vegetables I thought would be delicious and Allison already had some of the things we needed): a Red-pepper (more expensive but very tasty), fresh green-beans, onion, tofu, yellow squash. Allison had an onion and garlic and the rice.

Allison predicted the rice would take longer to make so she prepared it ahead of time. She tells me the key to making good rice is to use exactly what amount of water it says on the package, and to not remove the lid while its cooking because that lets out some of the moisture.

Steps: first we cut up the onions and garlic and started sauteing them as we sliced up the rest of the vegetables.
Once all the vegetables were sliced up and the onions and garlic were turning brown, we added the rest of the vegetables and sauteyed them for a few minutes.
While this was going on I sliced the tofu into little cubes.
Then Allison seasoned the tofu and veggies in the pan with chili powder.
We then mixed in all the tufu squares and continued sauteing the mixture until the tofu was brown around the edges.
That was it, we had a delicious stir fry dinner. 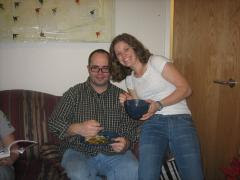 It was really delicious! Now I can't wait for our next dinner which will be “breakfast for dinner”