We are on the verge of a major cinematic milestone – this coming Wednesday, October 21st at precisely 7:29 pm Eastern time (or 4:29 pm California time) is the moment when Doc, Marty and Jennifer will arrive from 1985! It's hard to believe that this date, from the movie Back to the Future Part II, which once seemed like the distant future, is nearly upon us.

One thing that kind of annoys me in movies about time travel, is that they rarely take into consideration the movement of objects in space. I guess they are taking for granted that as they travel through time they are also traveling through space, and very rapidly, or else time travelers would find themselves in some interesting places.

...that exact spot on Earth where they left 1985 would be up to 520.344 billion kilometers removed from the same location in space in 2015, give or take a few million kilometers (depending on the affects of the rotation of the planets and the solar system within the Milkyway)...which would put the DeLorean half way between Earth and Alpha Centauri. Well not really. Alpha Centauri is 41.32 trillion km from Earth but that's still pretty far from Hill Valley. Hopefully Doc packed some extra oxygen for the ride back! Great Scott! 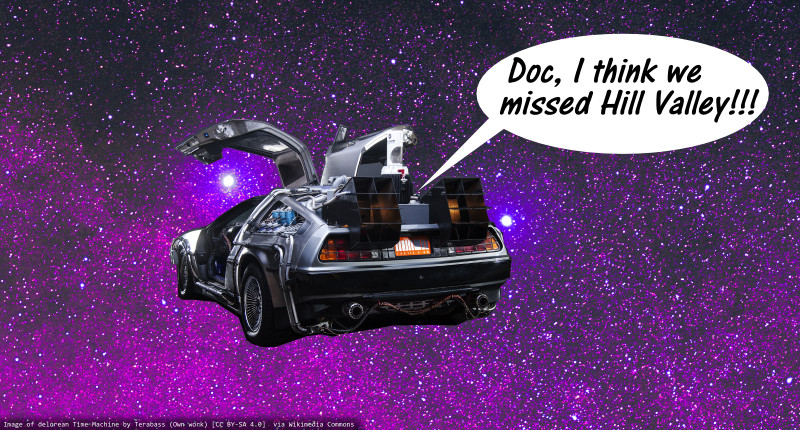 Labels: Back to the Future, movies