A Parks and Rec Easter Egg

It's not quite Easter, but I've found a pretty nice Easter Egg.

I have a guilty pleasure … watching the tv show Parks and Rec.  While there are a lot of hilarious scenes, one of my favorite moments is when Leslie discovers that her campaign signs were misprinted (Season 4, Episode 16 – 'Sweet Sixteen').

The signs contain the URL of the image that was intended to be used for the campaign sign (with just a tiny version of the intended image above the URL).  This is a hilarious example of how a minor misunderstanding can become a headache. 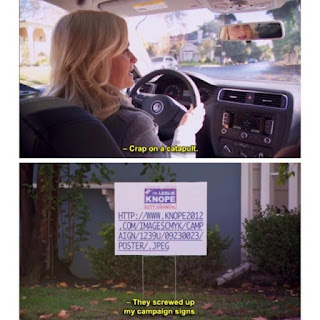 It occurred to me recently that the URL listed on the sign might actually link to the file.  Sure enough, the URL to the campaign sign file opens a full-size version of the campaign banner! If you download it, just be sure to change the file name from .jpeg to something with a complete file name, such as knope2012sign.jpeg, so your operating system can open the file.