After years of periodically checking the Cloverfield Wikipedia page's sequel section for any news on a possible sequel, this morning I was shocked to discover a new surprise trailer for what is almost certainly a Cloverfield sequel, and it is coming out in just a few months! They did it again!

I was fairly obsessed with the movie Cloverfield. The best part of the experience was the sneaky viral way it was marketed. From the sudden surprise trailer before Transformers, to the sly fake websites advertizing products and mysterious Japanese corporations, etc. This led to dozens of fan forums speculating what the movie was all about. Because other than being about a giant unseen Godzilla-like monster who trashes the Statue of Liberty then proceeds to ruin some guys going away party, we didn't really know much … which made the anticipation awesome!

Now this new film appears to be somehow connected. But it also looks like a film that is very much a departure from the style of the original. There was a theory that a second Cloverfield film would be another found footage style film but from someone else's perspective which could have somehow intertwined with the original, and might perhaps provide more clues to the events in the first film. Instead, this film looks a contained thriller. It appears to be about a survivalist/prepper (played by John Goodman) living in an underground bunker with a couple people he who he claims to be protecting from devastation above. Could that devastation be from the creature in Cloverfield? The other cast include Mary Elizabeth Winstead (who was the grown-up daughter of John McClain in the recent Die Hard films) and John Gallagher Jr.

Now going from the trailer alone there are no obvious connections between the films. However, apparently the film-makers have gone on record that the two films are connected, and even without that knowledge there are some facts that remove any question that they are. First, its a movie made by the same production company, Bad Robot Productions. And, has Cloverfield in the title (the title reveal even displays “Cloverfield” first). The trailer by the way is brilliant! Very similar to the trailer for Cloverfield, in that it begins with a positive atmosphere then seems to shift in tone to something more terrifying.

Many fans wondered if somehow JJ Abram's Super 8 was connected to Cloverfield, which also featured a viral marketing scheme, and featured a story focused on an encounter with a large alien creature. Both films featured a heavy military presence, and at the core of both stories is the theme of movie-making (in Cloverfield the entire film is presented as found-footage, and in Super 8 the film focuses on a group of adolescent aspiring filmmakers who inadvertently film a disaster that becomes key to the events of that film).

Here is my theory: 10 Cloverfield Lane is somehow a bridge between Cloverfield and Super 8. John Goldman’s character is a witness to the events in Super 8 (who was a child then) which have driven him to become a survivalist in case of any future alien encounter, and is thus ready when the events of Cloverfield take place.

Another possibility: there could be a LOST connection. Any fan of LOST knows that numbers play an important significance in the creations of JJ Abrams. The trailer for this film features numbers pretty prominently. The first shot shows keys featuring the numbers 4, 8, 1 and 3 being pressed on a Jukebox (48 is the number of the album - 13 is the track number). 4 and 8 are two important numbers in the show LOST. Later the number 550 is featured on a puzzle box. No doubt these numbers are clues as to what this movie is about, and have an important significance. Underground Bunkers also play a very important role in LOST.

What do the numbers mean? 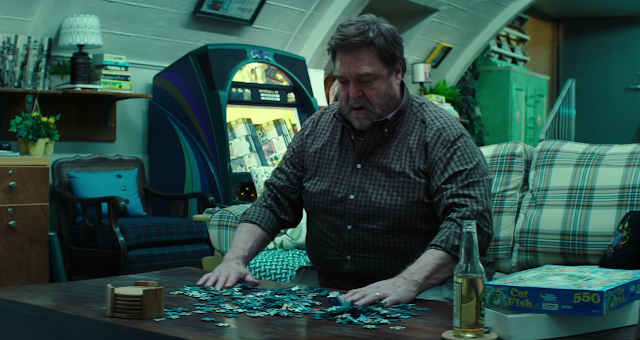 This trailer is like a puzzle, there are likely many clues

Let the internet treasure hunt for clues begin! I hope John Goodman's character packed plenty of Slusho in that bunker!!!