Recent Video Games I've Been Playing (... or thinking about playing) 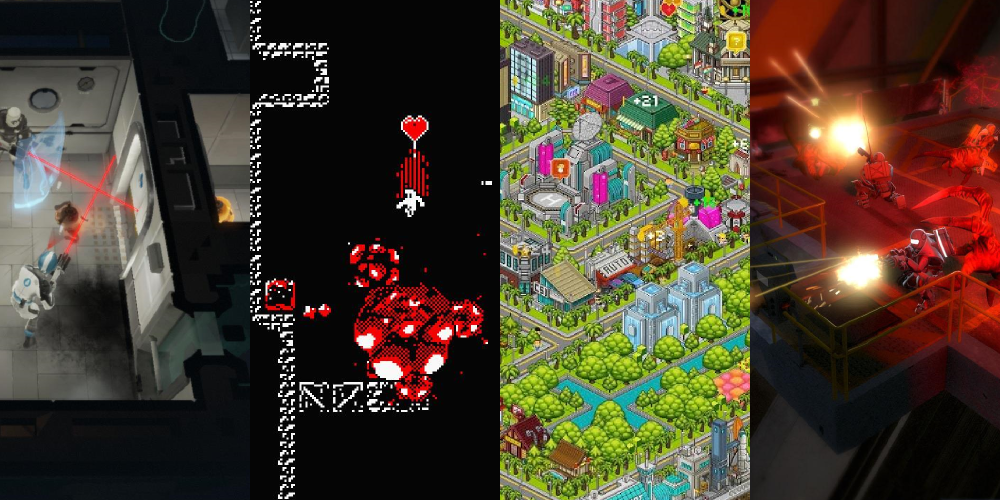 In recent years, there has been a big jump in indie video game development, thanks in part to video game marketplaces like Nintendo's eShop and Valve's Steam distribution service. More developers are joining the scene, producing gems like Cave Story that show that a simple concept and unique story can create a very enjoyable game.

Warp is a terribly funny top-down sci-fi adventure where you take on the role of an adorable little alien who has the fantastic ability to warp himself a short distance through walls into various containers such as barrels, pipes, and even human beings. You also have the ability to optionally cause whichever container you might be inside of to explode. The plot is: you've been captured and taken to an underwater base controlled by humans where you've been experimented on and tortured until they accidentally let you loose. The game presents itself as a top-down puzzle, yet with 3d visuals (similar to the perspective of the Legend of Zelda – A Link Between World).

Available on Xbox, Playstation and Steam.

Downwell is a very creepy yet ingenious 8-bit-style platformer having the unique characteristic of being a constant journey downwards. The objective is simple – you fall down a well and use your gunboots to eliminate enemies below you as you continue to plummet down the never-ending well. The website advertising the game is itself quite brilliant.

Available on iOS, Android and Steam.

I got very addicted to PixelPeople after I first tried it a couple years ago. The game is very similar in concept to games like Harvest Moon and FarmTown, with elements of city building, and it features a beautifully simple and retro looking UI. It's very easy to get sucked into as you attempt to keep expanding your futuristic town, trying to level-up so you can unlock the next cool feature. The plot is somewhat unusual as you play the part of a mayor seemingly creating your own afterlife/universe where you also act as a genetic manipulator by splicing your clones with each other to generate new kinds of people with different skill sets. Half of the fun is just figuring out how to splice different kinds of clones together to create new kinds of people to enhance your world. I must admit, I love the isometric layout and colorful 8-bit video game-style graphics. The game developers continue to provide updates to the game pretty regularly. Best of all, it's free! Be warned, it can be very addicting.

Available on iOS and Android.

Alien Swarm, like Warp, is a top-down perspective game with nice 3D graphics. The game is free from Valve on Steam. It was created as a proof of concept from some aspiring game designers who now all have jobs at Valve. Up to four players will shoot their way through an alien envasion. To get started all you need is to sign up for a Steam account and then you can download the game. Imagine the aestetics of Half Life and the gameplay of SmashTV.