The Whole World In Your Hands 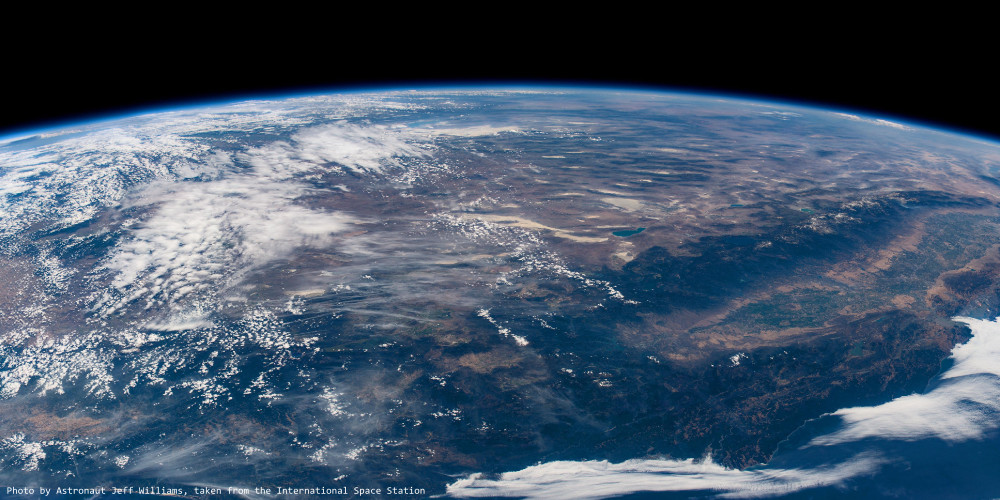 I stumbled upon this on Twitter earlier this week and it has really captured my attention. This photo by Astronaut Jeff Williams (who is currently residing in the International Space Station) is astonishing. It displays the entire west coast of the United States, from Washington State all the way down to the Baja Peninsula in Mexico.

I thought it might be a good idea to label some of the more distinguishable landmarks visible in the photo, see below...

Here is the high-resolution version of the photo with labels. You can also download the original photo from NASA's website.

It's cool that you can see so much of our country in such detail in one image.

July was an interesting month for me because I got to stick my toes in both the Pacific and the Atlantic Oceans. The month started for me with a trip to San Francisco, and ended with a trip to the Outer Banks of North Carolina. It was also my first time to fly across the country, check out the map I made of the trip here. It's amazing to realize that you're crossing so much terrain in just a few hours.

While I was at the beach I got to see three films: Star Trek Beyond, Ghostbusters, and Jason Bourne. Here are my reviews of each:

Star Trek Beyond (A)

I'm biased because I'm a Trekkie, but this really was a great Trek film. I've gone to see many of the Star Trek movies at the theaters in my life; the Search For Spock was the first, and it gave me nightmares after I saw the scene where brain eating bugs in forcably incerted into the ears of the crew.

I generally like all of the Star Trek movies, even the not so great ones (Generations, Final Frontier, ), but I was nervous that without Abrams directing Beyond that it might not live up to the first 2 new rebooted films; however, it really was a great Trek film. Simon Pegg (who plays Scotty, and Shawn in Shawn of the Dead) wrote a fantastic script.

It's a contained story, in that it doesn't add or take away from the bigger Trek universe. It stands on it's own as a very entertaining entry to the series. I really hope we get at least a few more films with this cast.

I wanted very much to like this movie! The original film is one of my favorites. On paper this film should have been great. It had the director from Bridesmaids, and some of that amazing cast. It had an interesting idea of fliping the genders of the characters from the original. It had so much oportunity, but when it was all said and done, it was just a pretty ok remake.

I'm not sure I understand the decision to make this a remake, instead of a sequel. It seems like there was plenty of opportunity to keep the movie in that original film universe, rather than rebooting the whole series. And had that been the direction, there would not have been such a need to rank it against the fantastic original film.

Those gripes aside, it was a pretty funny movie, with some decent jokes are spread throughout the film. The best joke in the whole film in my opinion was related to the mayor's detest for being compared to the mayor from Jaws.

Overall, its a not terrible remake, but it could have offered a lot more.

Jason Bourne was sadly just not very good. I had to make a trip to see this with my Dad because we have seen all but the original Bourne film in theatres together (and we saw the last one at the beach as well coincidentally). This Bourne movie is really more of the same, there was nothing that really sets it apart. I think it missed two big opportunities to make it a better movie (which are still opportunities for future Bourne films!).

First, they didn't take advantage of any of the plotlines set up in the previous Bourne film (Legacy). I think people don't give Legacy enough credit, even though it was a very odd choice not to have Bourne as a character, they introduced some really interesting new scenarios/secret programs to investigate. The story was a lot more intersting than what we got in this last Bourne film.

Second, the intrigue of the original movies (and Legacy) was the plight of the main character figuring out their past. This is no longer the case for Jason Bourne, who knows he's actually David Webb. They did have some interesting backstory about his father. What would have made this film a lot more instesting is if now Bourne was a free agent, doing what he deemed prudent and in the best interest of the country he swore to protect. That would end up with a character a little more like Robert McCall, but it just seems like the natural progression for a guy like Bourne.

Allow me to pick a nit for a moment … “Jason Bourne” is a terrible name for this movie! It's an ill-conceived departure from the naming strategy of all the previous Bourne films (including the most recent Bourne film which didn't even have Bourne as a Character). Really anything would have been better: The Bourne The Bourne Colonoscopy, The Bourne

I have to wonder why the studio thought they should give the film the name “Jason Bourne”. Were they trying to follow other action series of late such as Rocky and Rambo, or Fast and Furious? Do they subscribe to the advice of some beguilingly idiotic think tank which generates these terrible name ideas? Hollywood, stop giving your movies dumb names!

When I first heard the name “Jason Bourne” a tiny seed of doubt was sowed in my mind. I have a theory which is so far proven accurate, which is: if a movie has a bad name it's more likely that the movie will be a bad movie. This isn' always true, just think of the following phrases to get my point: “Kingdom of the Crystal Skull” “Batman Vs. Superman”.

There was nothing innovative or exciting about this movie, and that's unfortunate considering how excellent the series has been so far. Lets hope that the studio dosen't give up on Bourne and persues some more interesting story lines in future films.