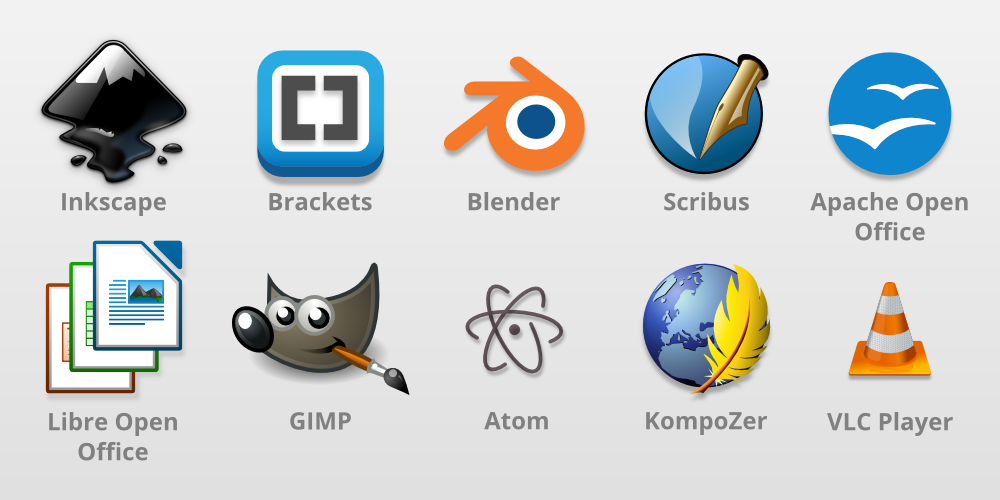 Why do I love open source software so much? Because it enables creativity. You don't have to have access to expensive software licenses to unleash your inner creative potential. I've been a big fan of Open Source Software ever since I first discovered the original Open Office software in the early 2000s. Open Office was capable of nearly everything I needed from an office/productivity suite of tools, and was compatible with Microsoft formats.

I also feel that the more tools you know how to use, the more overall capability you have, thus encouraging intellectual curiosity, a trait that is sought after in the technology world. Just like a master carpenter tends to have many tools that they may use for a specific purpose, the more design tools you have experience with, the more well-rounded of a designer you will be.

you can do nearly anything with Open Source software! Working in the creative world, its truly difficult to get by without access to a subscription to Adobe Creative Cloud (which until not too long ago was the Creative Suite) since it's the industry standard, and there are a lot of great features that make Adobe a logical choice. But if you're just interested in exploring your creativity, you can find an open source program that matches nearly every component of the Adobe Creative Cloud.

Office Software – don't waste you money buying MS Office. You can do just fine with Open Office software. Right now there are two prominent choices: Apache Open Office, and Libre Office (I prefer the latter). This is because the original Open Office software (which I have been using for over 10 years) which was developed by Sun Microsystems, was forked into two separate products when Oracle acquired Sun. The Document Foundation has been more actively developing Libre Office.

Web Design/Development – Coding – Now there are an abundance of execellent text editors to code with, as I have mentioned in a previous blog post. I recommend Notepad++ and Brackets for raw text editing greatness. If you need a What-You-See-Is-What-You-Get editor, try out Kompozer or N/Vu (which is what I learned with).

Illustration – Inkscape is one of my favorite tools. It's perfect for logo design, map making, wire-framing, or really any soft of vector-based graphic design. It's very similar to Adobe Illustrator although it does not come with any of Illustrators frills such as the many brushes. But if you're savvy, you can recreate those features using Inkscape. Try it out.

Photo Editing – GIMP (or GNU Image Manipulation Program) is a great raster image editor. It's perfect for doing the kinds of things you would normally use PhotoShop. The tools have different names, and the UI is not as pretty as PhotoShop, but it gets the job done. GIMP can even do some things that PhotoShop cannot do, such as save nativity as multi-layered ICO files.

Desktop Publishing – if you've worked in desktop publishing then chances are you have used InDesign. It's great for putting together larger documents with different page layouts, importing images files, etc. Scribus is the open-source equivalent of InDesign, it's what you use to pull it all together.

You don't have to spend a dime to have all the tools you need to explore your creativity! Read about more Open Source Software tools here.