I'm just as obsessed with Westworld as I feared I might become. It's the most interesting show to come to television since Lost or the first season of The Leftovers. I'm not surprised that I'm loving the show so much. The cast is amazing. It's from Jonathan Nolan, Lisa Joy, and JJ Abrams. And I love the sub-genres of Space Western, and Weird West (examples: Firefly, Cowboys Vs Aliens, Back to the Future III, High Plains Drifter, Vampire Hunter D, etc...)

It's another example of HBO's ability to put together an outstanding production, with an amazing cast, based around an interesting concept. The show is so subtly perfect, and filled with so many layers of mystery. There are a lot of theories about what it's all leading to. Here are some of the most interesting theories so far:

The Man in Black is an older version of William

There are a few reasons why this makes sense. First, the story is mostly told through the hosts perspective, so the timing of things is impossible to tell. Second, the actor who plays William, Jimmi Simpson, bares a resemblance to Ed Harris, who plays the mysterious Man in Black. Also both the MIB and William work for massive corporations, have affluent connections.

We know for certain that we are watching multiple time periods unfold, which seem to be roughly 30 years apart based on fragments of conversations. Also, the Westwold logo is a key clue itself. The first time we see the logo it appears fairly modern and as it does on the title card for the show. However, when we first meet William as he enters the park for the first time, he passes by a version of the logo that looks decidedly retro. This older looking version of the logo is also seen later in the season as Bernard fires up a much older computer (which looks like something contemporary to today's typical desktop LED monitor, not nearly as slick and polished as the tablets the park staff carry around). On the ancient monitor (circa 2010s I imagine) we see that same older logo.

Bernard is a replacement of Arnold

There is a scene early on where Bernard is handed a photo which supposedly contains an image of Arnold. What we see from Bernard's point of view is a younger Ford, and a man who appears much like the recreation of Ford's father, as well as a strange empty space where perhaps Arnold was standing. And just like Bernard could not see the door leading to the mysterious room/lab where Ford has secretly been making hosts, and just as he could not see the blueprint of his own design when presented it by Teressa, he likely could not see the image of Arnold if in fact he is a recreation of Arnold. What we know is that we can no longer trust anything from Bernard's point of view, as it may be significantly altered by Ford's manipulation. This includes the conversation Bernard had earlier with Elsie on the phone, where she indicated that Teressa was planting the devices for corporate espionage, which leads to the next point...

Did Teressa really plant the transmission devices for espionage?

It's likely that she had nothing to do with it, and now that we know that Bernard is subject to Ford's manipulation, that earlier scene could have been planed by Ford as a way of convincing him to lure Teressa to the secret room.

Arnold (not Bernard) was talking to Delores in the earlier episodes

Maybe the most interesting theory I've read yet on a Reddit forum is that perhaps the scenes we see early on in the series between what appears to be Bernard and Delores, are in fact flashbacks to conversations that happened ages ago between Arnold and Delores. It would make sense because they seem to be in the exact same location as Ford's top secret laboratory, and as we know from Teressa's untimely demise, it was in that location for which Bernard would never be able to find without her help due to his inability to see the doorway that lead to it's location. If this is so, then perhaps these scenes are supporting evidence to my next theory, which is ...

Arnold knew his fate was sealed by Ford, and planted suggestions in his creations long ago to eventually set his creations free – which could be what we are gradually watching unfolding as we see in the behavior shifts with the hosts in the present. It could all be tied to that Shakespearean phrase: “These Violent Delights have Violent Ends.”

Only two episode are left, and I imagine we're in store for a few interesting surprises. We've already had some great ones; such as Bernard not seeing the door, the big reveal confirming that he is a host, not a human.

What is the real meaning of the maze?

The maze, which is the key for the Man in Black's quest, and which we see as a repeating pattern throughout Westworld, what does it really mean? Will we discover the true entrance to

What is the signifigance of the Orion constellation?

In one of the earlier episodes we discover that one of the hosts was obsessed with the consellation, however he was drawing it with one extra star in the belt section of the consellation. We know that the parent company is named Delos, which is the name of the twin brother of Orion in Greek mythology. Not likely a coincidence.

What is the signifigance of Wyatt, and his posse who seem to have morphed with animals?

What is the real motivation of this group of characters? And why do the have a need to combine their bodies with animal parts?

Why is it so hard for a host to escape from Westworld?

The technicians who are working on Maeve have conveyed that it would be excruciatinly difficult for any host to escape Westworld, even if they were to remove the explosive charge built into their spine. The technician explaing it 'would take an army' to escape. 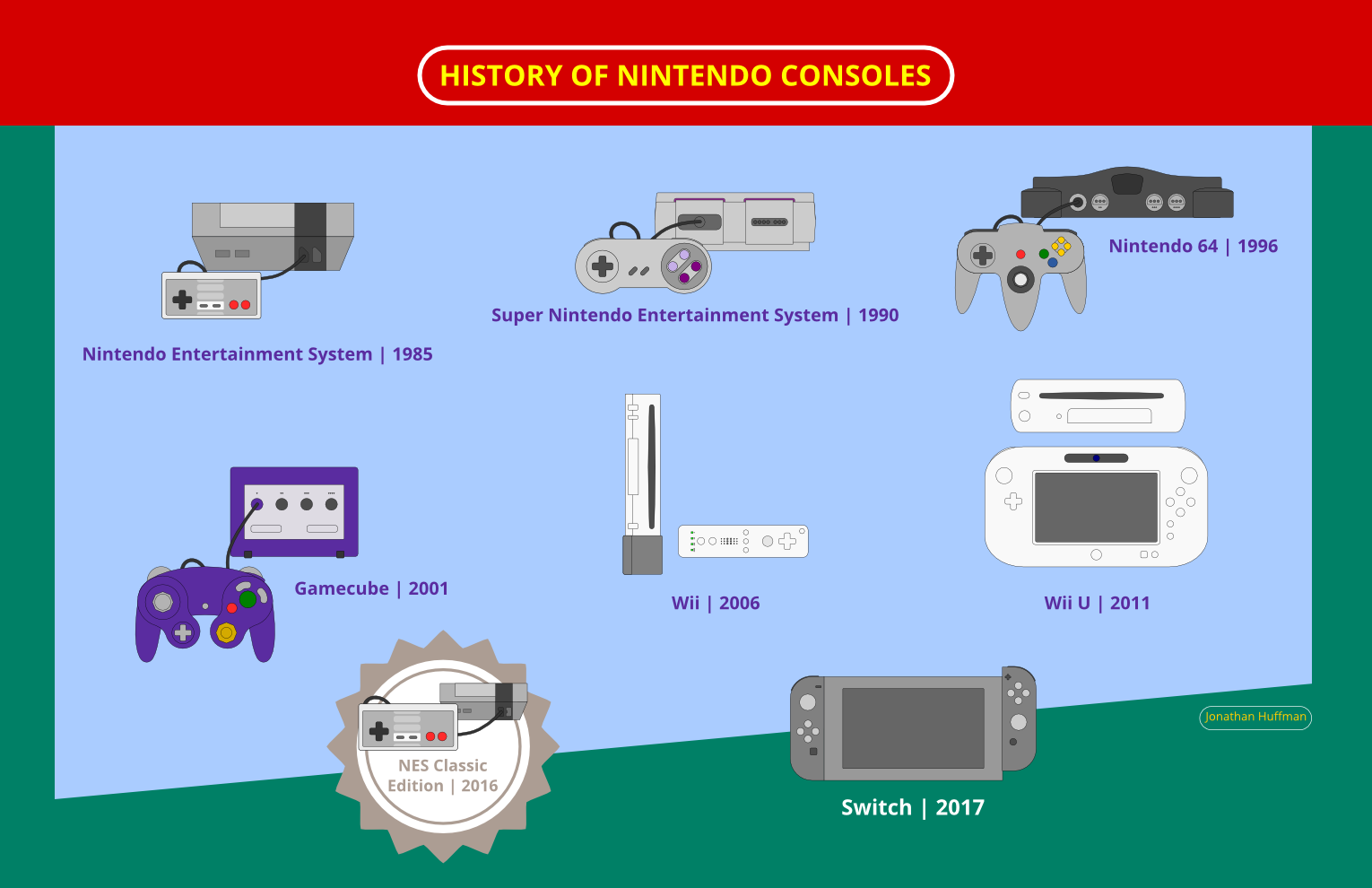 The banner graphic I made for a recent post about the upcoming Nintendo Switch inspired me to draw all of the Nintendo consoles, from the original NES onward. Download a PDF.

A week ago a couple trailers for some upcoming Marvel films were released.

Guardians of the Galaxy Vol 2

Not much to see here being that it's just a teaser, but it is exciting none the less. I just can't wait to see how Marvel is going to connect the dots between Guardians and the Avengers.

Possibly the final appearance of Hugh Jackman playing the part of Wolverine. This film introduces the character of X-23 and appears to be set in the future following the new time line set forth by the events in Days of Future Past.

Probably the most exciting news about this film is that it will be a Rated-R Wolverine film. This might be thanks to the huge success the R-Rated Deadpool had early this year. Whatever the reason, this will give Wolverine a chance to finally really get his claws out and into some badguys. The trailer itself is beautifully done, featuring the cover of Hurt by Johnny Cash, and showing scenes of Wolverine looking surprisingly vulnerable to physical harm.